Residential interest in industrial activity in and around Alberta’s Industrial Heartland is down slightly from 2015, according to a 2017 survey conducted by Life in the Heartland. Overall, 69% of respondents follow industrial activities very or somewhat closely compared to 76% in 2015.

A telephone poll of 400 residents from Alberta’s Industrial Heartland and surrounding region was conducted in 2017 to determine public perceptions about industry and environment-related topics, how closely residents follow industrial development, and preferred sources of information. The data was compared to a similar survey conducted in 2015.

“Tracking resident perceptions and issues provides valuable insight on trends and shifting priorities for the Industrial Heartland community,” says Tracey Hill, Chair of Life in the Heartland. “Our ability to identify emerging issues, like the economy, in addition to a sustained trend in environmental topics, helps us continue to provide relevant information to our audience and helps to guide our engagement activities.”

When asked where they obtain information, respondents selected local newspapers as their preferred source, with local television ranking second. The internet/social media saw a remarkable 9% increase over 2015 – more than 39% of respondents indicated that social media is an important source for local and regional information.

Air quality remains a top issue for respondents.  More than 60% rated air quality where they live as excellent or good, up 3% from 2015, while approximately 27% rated the air quality as average. 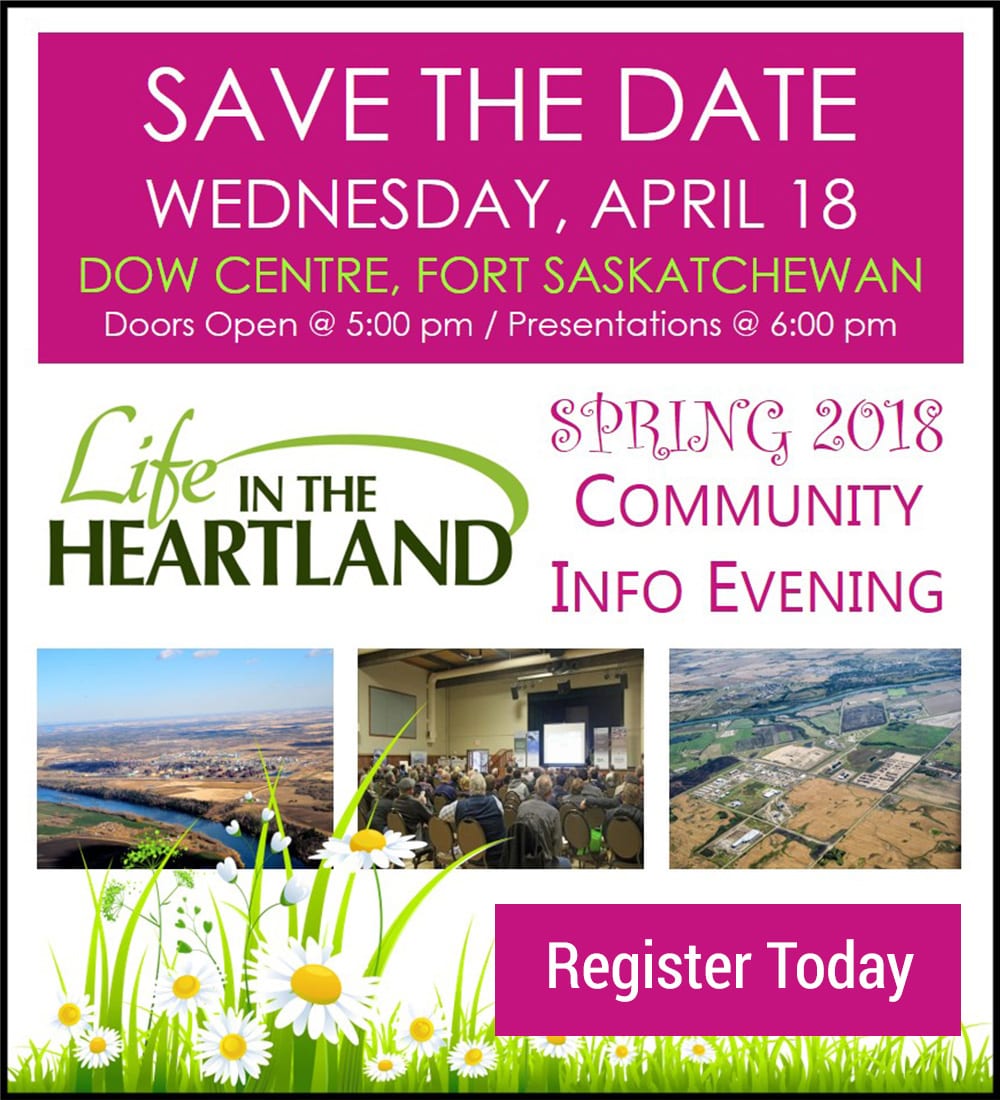 The Northeast Capital Industrial Association 2017 Report to the Community is now available. Read the report.

Resident Emergency Readiness in the Heartland

Alberta is home to the top 10 costliest disasters in Canada’s history. Floods, fires and severe weather events affecting hundreds of thousands of Albertans are all recent occurrences. If an emergency happened close to home, would you and your family be prepared?

A recent Life in the Heartland survey asked residents in the region about their overall emergency preparedness. “We wanted to obtain a snapshot of how ready people in our local communities are for emergencies,” says Brenda Gheran with local mutual aid group Northeast Region Community Awareness Emergency Response (NRCAER), a partner in the Life in the Heartland initiative. “The survey results give us insight and help identify where safety education efforts should focus.”

“In many cases, people only think about emergencies when they are experiencing them,” says Gheran. “An effective response relies on each of us taking time before an emergency occurs, to know the risks, make a plan and have a kit.”

When: Monday, May 7, 3:00 – 6:00 PM
Where: Redwater Legion, 4708 – 50 Avenue in Redwater
What: A celebration of the opening of Fort Air Partnership’s new air quality monitoring station in Redwater. Includes tours and a short Annual General Meeting.
RSVP: Interested in attending? Please let us know.

In 2017, FAP’s six stations that collect data used to calculate an hourly and forecast Air Quality Health Index (AQHI) in and around Alberta’s Industrial Heartland registered low risk readings the vast majority of the time. Lamont County had the highest annual percentage of low risk readings at 98% while Fort Saskatchewan had the lowest at 93%. Risk to health increases as the index level rises. Go to fortair.org for more information.

In total across the network, 43,014 hours of AQHI readings were recorded in 2017. Of that total, 57 hours (or less than 0.2% of total hours monitored) were in the high or very high risk AQHI category. These were due mainly to forest fire smoke or winter temperature inversions. During a winter inversion, cold air along with pollutants is trapped near the ground by a layer of warm air. This is a weather condition that impacts large parts of the Edmonton Metropolitan Region whenever it occurs.

Five year trends of both AQHI and exceedances show fluctuations. This can be attributed to variances in annual seasonal events like forest fires, weather patterns and FAP’s transition over the last five years to a regional monitoring network that more accurately monitors air quality where people live.

Local residents can check the forecast and daily AQHI at fortair.org. The website also has a live data feed of a variety of substances FAP measures, and weekly, quarterly and annual statistical results.

The AQHI describes the level of health risk associated with an AQHI number. The levels are low, moderate, high or very high. The higher the index number, the greater the health risks. Six of FAP’s nine continuous air monitoring stations measure the substances required to calculate the AQHI.

*The new Redwater station began operating in October, 2017 but did not start reporting the AQHI until November 1.

2018 marks the 20th anniversary of Alberta’s Heartland Industrial Association. As we look back at our Association’s history, we reflect on all that the Association has achieved over those years and we are proud of the work we’ve done to attract investment, to drive energy diversification, and to promote innovative business solutions.

Twenty years ago, the municipalities of the City of Fort Saskatchewan, Lamont County, Strathcona County and Sturgeon County recognized the opportunity afforded them by their unique location in the province. We created a partnership dedicated to strengthening sustainable industrial development that benefits the residents and businesses in our municipalities. With the addition of the City of Edmonton in 2010 and three Associate members – Bruderheim, Gibbons and Redwater in 2011 – the Association continues to demonstrate the value of that cooperation.

As a result, more than $40 billion in capital has been invested in the region, realizing significant returns to the economy of Alberta and to the communities in the Heartland region. We are recognized globally for our ability to attract investment and make valuable community connections. As well, in the past 20 years we have seen tremendous growth in the Industrial Heartland, which is reflected in our tremendous economic impact and thousands of jobs created.

Although in recent years Alberta has faced economic challenges, our Association has advocated tirelessly for programs that enhance investment, maximize diversification opportunities, and position our region as a leader in petrochemical development. Specifically, these efforts have seen the development of the Government of Alberta’s Petrochemical Diversification Program, the completion of the North West Redwater Refinery, the announcement of Inter Pipeline’s Heartland Petrochemical Complex and the proposal of a second new propane processing facility, all of which will diversify our energy exports and contribute to sustainable growth in the region.

So much benefit has been derived from our commitment to our original vision in the region and we will continue to focus our efforts on partnerships with industry, community, and government stakeholders.

With the collaboration, innovation and diversification that have resulted from these partnerships, Alberta and the Heartland region can continue to look forward to a bright, sustainable future. Visit our website at www.IndustrialHeartland.com to learn more.

Heartland Gears Up for Turnaround Season

It is that time of year again when facilities in Alberta’s Industrial Heartland take advantage of spring weather. For many companies, spring signals the start of turnaround season and the continuation of construction projects.

Maintenance Is a Must

Just like your vehicle and home, industrial facilities require regular maintenance to keep them operating safely and efficiently. Companies schedule turnarounds to decrease or stop production so that certain maintenance tasks can be completed. Depending on the facility, a turnaround can last as short as a few days, or up to a month or longer.

The work completed during a turnaround involves equipment inspections and, if necessary, repairs, replacements, and technology upgrades. Particularly on older facilities, new technology can improve an operation’s environmental performance and help increase productivity.

Construction and turnarounds generate additional local spending on goods and services. They also create employment, as extra manpower is required to complete these projects. This added manpower may result in a noticeable increase in traffic on local highways. Turnarounds may also generate additional noise or visible activity as maintenance work is completed.

Construction activities at North West Redwater Partnership’s Sturgeon Refinery site are expected to be complete this spring with commissioning and start-up activities running throughout the summer. Companies with planned turnarounds this year include:

The construction workforce at the Sturgeon Refinery site is on the final push toward completion. Finishing construction is the next big milestone on the way to full operations.

The refinery is made up of ten large units. Eight of the ten are constructed and in various stages of commissioning and start up. Each unit has a team of experienced personnel to ensure the equipment is running properly, procedures are validated, and performance is monitored. Cold weather during the winter months provided key learnings to ensure the refinery is ready for operating efficiently throughout Alberta’s four seasons. 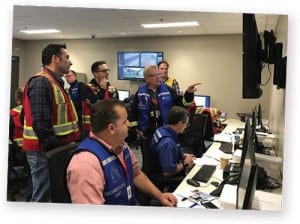 Aerial view of the Sturgeon Refinery

The two units still under construction include the LC Finer, which processes some of the heaviest fractions of bitumen, as well as the gasifier, which collects CO₂ produced in the refining process, reducing the carbon footprint of the end product. Remaining work on these two units mainly includes electrical heat tracing, insulation, and scaffolding. Target completion is this spring, at which time commissioning and start up will be the focus.

This past December, the Sturgeon Refinery celebrated the production of first diesel. Final product began shipping through pipeline to Pembina just south of the refinery for distribution to customers via truck and rail.

At the current stage of construction, the refinery is able to process synthetic crude oil into diesel and other value added products. As part of commissioning and start up, a partially upgraded feedstock such as synthetic crude allows for testing and adjustments in the units that are functioning. Once the refinery is fully operational, it will use bitumen feedstock to complete the entire refining process from start to finish.

Since 2011, over 50 million hours have been worked on the project. For the average person who works a regular 40 hour week for 52 weeks a year, it would take over 24,000 years to work that many hours. At peak construction, over 8,000 workers were on site every day, with that number dropping to approximately 2,500 people per day currently. The majority of those are involved in finishing construction activities. Various positions required for long term operations still need to be hired, though most of the 400+ people are already in place.

With a substantial decrease in workforce numbers, the bussing program came to an end in December. All totalled, the kilometres logged by the busses equal over 350 trips around the earth – that’s one per day for nearly a year.